This catalogue from a 2009 exhibition at the Wheelwright Museum focuses on paintings by students who attended the Santa Fe Indian School between 1919 and 1945. The school had been established by the federal government in 1890 as an attempt to assimilate Native American children into the greater American society. Reforms to the school’s mission were made in the early twentieth century with the establishment of an art school curriculum that grew in popularity. By 1932, under the direction of Dorothy Dunn and later Geronima Cruz Montoya, the school encouraged a modernist style to students—many would later become renowned artists. Fred Kabotie, Velino Shije Herrera, Allan Houser, Andrew Tsihnahjinnie, Pablita Velarde, and Sybil Yazzie are among the artists represented. Author and curator Michelle McGeough consulted with and interviewed many of the living artists and their descendants to present a compelling narrative that represents the view of the artist and communities. 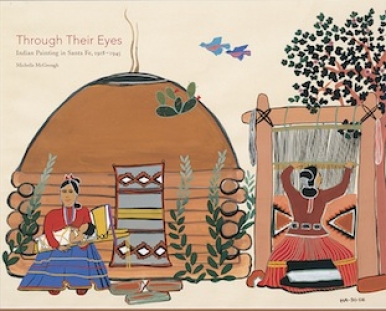