Cady Wells (1904-1954) was one of the most innovative modern artists to work within Santa Fe and the Taos colonies between 1932 and 1954, and one of the finest American watercolorists. This full-scale retrospective of his work includes essays in which explore Wells' art and life including his intimate friendship with Martha Graham.

"In this imaginative study of Cady Wells, the authors consider his multiple roles as an artist, patron, and collector, reclaiming his position as a significant New Mexico modernist, and positioning him within the broader cultural context of American art. In addition, the volume is an important contribution to gay studies, interweaving the socio-sexual environments that shaped the artists often conflicted nature."
-Betsy Fahlman, Professor of Art History, Arizona State University, and author of Chimneys and Towers: Charles Demuth's Late P

"Many books are hyped as a revelation, but this one really is. Working as a cultural historian unprejudiced by art historys conventional bias toward already famous names, Lois Rudnick has rediscovered a mid-century American artist whose work easily stands comparison with any of his contemporaries. Fascinating essays Robin Farwell Garvin and Sharon R. Udall explore other aspects of the artists life, revealing his importance as a collector of Hispanic religious art and as an intimate friend of Martha Graham."
-Christopher Reed, Asssociate Professor of English and Visual Culture, The Pennsylvania State University, author of Bloomsbury

"Cady Wells and Southwestern Modernism recuperates the art and career of this fascinating painter and contributes in significant ways to the growing literature on region and twentieth-century American modernism. Rudnick presents Wells southwestern landscapes as inhabiting a queer space that express his sexuality and an apocalyptic post-World War II terrain haunted by Los Alamos. A vision that clashes with widely known art representations of New Mexico and disrupts the popular image of the region. Discussion of Wells postwar art produces a more inclusive picture of American abstraction of that period, one traditionally dominated by the New York School."
-Donna M. Cassidy, Professor of New England and American Studies and Art History, University of Southern Maine, author of Mars 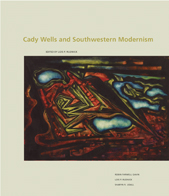